The City of the Dead mimics the Streets of New Orleans

St. Louis Cemetery No. 1, New Orleans, Louisiana:  The first tour I signed up for was a tour that included the St. Louis Cemetery No. 1.  I actually didn’t know there were 2 until I got there.  This shot is one of my favorites as it imitates the city itself with the variety of paint colors.  This is actually a point in the tour where our guide explained the differences between restoration and renovation.  The tombs seen in this photo have been restored, which costs more initially, but will hold up longer over time.  Renovated tombs typically use Portland Cement, the most common cement, however it’s not very conducive to water.  One has to wonder if the Catholic Diocese referenced a map when they made the decision to use Portland Cement when fixing the tombs in this landmark graveyard of the Crescent City, *cough* named for its crescent shape border along the Gulf of Mexico and the Mississippi River.  Just sayin’.  It comes down to finances.  The materials for restoration are specific and meticulous, and can’t be purchased in bulk or slapped together by anyone with a rolling brush.  The cool thing is there is an organization that several of my guides discussed called Save Our Cemeteries, a group founded in the 70’s whose mission is in education of the architectural and historical value of the New Orleans’ cemeteries and they spend most of their raised monies on clean up and restoration.

There are several various kinds of burial in the cemeteries themselves.  Our guide noted 4 specific, but for the life of me I can only remember 3:  Step burials, Family tombs, and Social Graves.  Check out this post by Tess Conrad for additional photos and more burial examples of the NOLA graveyards.  There are quite a lot. 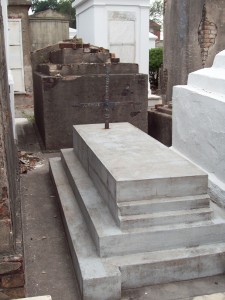 Example of a Step Burial

Some of the earlier graves looked like this, and could be used for families.  Similarly, the Jewish graves in New Orleans cemeteries resemble this, but the the middle is hollow and filled with dirt, so the body is placed in the earth.  Then it is covered in rocks and shells to weigh it down.  Tess’ post has photos of this. 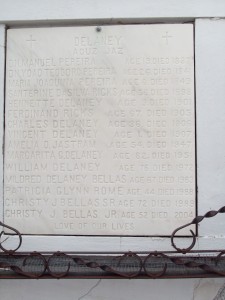 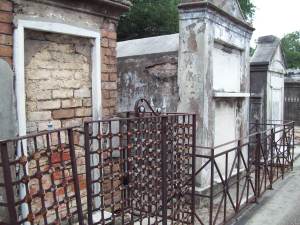 Family tombs are the most common, though they range in size, some color, structure, and age.  It’s difficult to read, but the marker on the left was first used in 1837, and last used in 2004.  That’s pretty fascinating.

Typically a family tomb was just inherited of sorts.  Any new tombs or new use of family tombs now cost quite a bit over time, as the Church requires any new “inhabitants” to pay for perpetual care of the grave.  This allows the Church to keep any new graves within color guidelines (white) and pays for the cost of that Portland Cement when renovation is needed.

Many of you may be familiar with how the family tombs operate, but if you’re not, I’ll explain briefly.  When a family member died they were placed in a wooden coffin (still used today), and sealed up in the family crypt.  Depending on when the next family member passed away, they would remain there for at least a year.  If you were unfortunate enough to lose more than one family member in a year, you had to then rent a tomb to temporarily house the additional body until the year was up and the first body could be swept up and pushed back into the pit of the tomb.  Under each family tomb is a pit, and when the body had decomposed after a year, the bones were swept up (and now sealed in plastic bags for DNA purposes) and dropped into the pit, thereby creating space for the next family member.  Many tombs house up to 40 or more family members.  Some of the markers are funny, like a husband being buried with both his first and second wife in the same tomb.  Others are sad, you see families that lost several children.

Lastly, you have society tombs.  If you couldn’t afford a family tomb, a cheaper way to be buried was as part of a society.  There are guilds, veteran, and artists society tombs.  This one is the Italian tomb, and coincidentally the film site of Peter Fonda’s acid trip in the movie Easy Rider.  It is because of that scene the Catholic Church forbid any other film crews inside the St. Louis cemetery.  Now, even documentaries, do their filming in the Lafayette Cemetery.

The St. Louis Cemetery is home to several noteworthy residents.  My two favorites being Homer Plessy (as in Plessy vs. Ferguson, “separate but equal” Supreme Court decision) and Marie Laveau, the noted “Queen of Voodoo.” 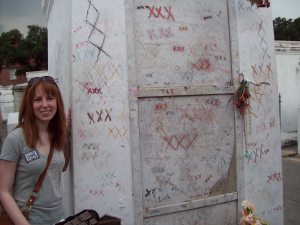 Everyone always wants to know what the X’s mean on Marie’s tomb, and according to our guide, they don’t mean a thing.  Leaving an offering is typical, but the triple X is just desecration of the grave.  I’m curious if anyone else went to New Orleans and heard different.  I know there’s superstitions online, but I’d like to know what another local says.  I was surprised to learn how closely Marie worked with the Catholic Church.  That was overall something really fascinating about this city, how 2 religions could impact one another so closely and thrive side by side.  Many voodoo gods have similar qualities to Catholic saints.  I bought Zora Neale Hurston’s book Tell My Horse inside a voodoo shop, so it’s on my reading list to learn more about the culture as it originates from Haiti and Jamaica.

The cemetery was full of history and culture.  It was overwhelming and peaceful to know you were surrounded by life stories inside those gates.  Anyone else felt that way when visiting a cemetery?  Or a church?  Or a new city?  Every place has a story, and I’m guessing there are many versions to tell in this place.