So when I spotted The Broke and the Bookish‘s Top Ten Tuesday theme of ten books I’d love to read with my book club, I had to share my suggestions. Be sure to swing by their post and check out other book club suggestions too!

In my group, we have 11 members and meet once a month, with December being a holiday party in which we each wrap a book we read in the past year to giveaway. It works out nicely that each member gets to pick the book for the month they host book club. This year we also each picked a genre so we’d end up with a wide variety of kinds of books. Should be a fun year!

Since book recommendations are always something I love, in addition to my dream list, I’m sharing the titles my book club has selected for this year so far.

1. A Tale for the Time Being by Ruth Ozeki

The story of two women – Nao, a teenage girl who feels she has nothing to live for and Ruth, a novelist living across the ocean who finds a lunchbox with a secret history inside. Now, these women’s stories are about to entwine.

I grew up watching Shirley Temple films, so I’ve always wanted to read this book. Sadly, it’s out of print, but you can get used copies on Amazon. This is her story about becoming a rising star during the depression era.

3. The Girls of Atomic City: The Untold Story of the Women Who Helped Win World War II by Denise Kiernan

We’ve already read quite a few war books in my club, but none that focus so much on the women’s perspective. Almost 75,000 women were recruited to work in Manhattan Project’s secret cities on a variety of tasks that aided WWII.

Sarah and Jennifer are two friends who make one bad judgement call and spend the next three years held captive by sadist men. Ten years later, when Sarah’s abductor is up for parole, she decides to confront her phobias, and faces fears she didn’t know existed beneath the surface.

Phones no longer ring. The internet stops working. News reports have ended. People live indoors and stay there. One look at what’s outside and they will never be the same again.

Jenna Metcalf is searching for her mom. Her mom that has been gone for over a decade. She scours what little information is left behind and partners up with both a medium and a private investigator.

7. The Wild Truth: The Untold Story of Sibling Survival by Carine McCandless

Most are familiar with the story of Chris McCandless, the boy who left home to live off the land. His story of the nomadic life was made famous as the subject of Jon Krakauer’s book, Into the Wild. Now, twenty years later, Chris’s sister, Carine, shares intimate details about her brother’s journey and their family.

8. Without You, There Is No Us by Suki Kim

Author Suki Kim shares her experiences of teaching English in North Korea. It’s a mysterious world where her letters are censored, yet she adores the enthusiasm of her students. A unique glimpse at a culture we rarely get to peek into.

9. See How Small by Scott Blackwood

10. All the Bright Places by Jennifer Niven

The hottest new title in Young Adult novels. A chance encounter on the school roof throws Theodore – who thinks only of death – into Violet’s world, where she lives in the future – planning for life after graduation. How will these polar opposites shape one another? 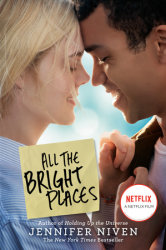 Have you read any of these titles? What did you think?

What books would you pick for your book club to read?