What I’ve Been Reading

The one good thing about colder weather is it’s the perfect excuse for curling up with a good book.

I’m an avid coffee shop attendee and I love seeing so many students bent over the tables with their books, and sure homework too. I love seeing people with their newspapers and novels and a big mocha next to them. November is also the start of National Novel Writing Month, or NaNoWriMo. Thousands of writers from all over attempt to write 50,000 words in a month’s time.

How’s everyone doing on their reading challenges this year? Anyone participating in Roof Beam Reader’s To Be Read Pile Challenge or make one up of their own?

I’m 2 books away from completing my list, but feeling wary whether I’ll finish. I hope to read The Secret History by Donna Tartt and Ketchup Clouds by Annabel Pitcher yet this year.

I’ve had some interference with my book list, you see.

His name is Jamie Fraser. And he lives in the Outlander series. 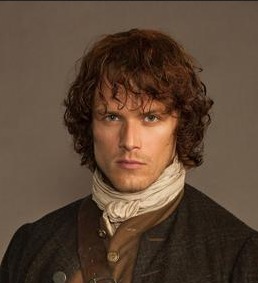 Oh hello there. When did you come in?
Please stay awhile. In fact, let’s plan a trip to Scotland together.

It’s growing. Look what I just scored from the library’s fall book sale!

Having fun isn’t hard when you have a library card!

I have been diligently trying to space out my series reading and catch up my TBR pile. Here are a few recommendations I have for whatever mood you may be in.

For lovers of family dynamics ~ The Kitchen Daughter by Jael McHenry

A little bit paranormal, a lotta heart, The Kitchen Daughter tells the story of Ginny, a twentysomething with Aspberger’s Syndrome, but she doesn’t know that. She was always raised to believe she had “a personality” and nothing more.

The book opens at the funeral of her parents, and now Ginny and her sister are forced to learn how to communicate together in an unknown future. What’s more troubling for Ginny is the fact that she’s seeing ghosts. By cooking handwritten recipes of loved ones who’ve passed, Ginny can talk with them.

Written from Ginny’s perspective, The Kitchen Daughter is a unique glimpse inside someone’s head – a woman who is just as independent and caring as the rest of us, but shows it differently.

I loved the paranormal element the most in this book. I love how Ginny was able to take an experience like a conjuring and see it as a way to learn more about her family. And I liked the relationship between Ginny and her sister, which felt very real as each struggled to navigate what they thought was best for the other. This would be a great book for book clubs to read.

For fans of YA ~ Eleanor & Park by Rainbow Rowell

For starters, while published in 2013, it takes place in 1986. I wondered whether today’s teens would understand the magic of the mix tapes exchanged between these two. I loved it.

Eleanor and Park couldn’t be more different, or more the same. This book ended in a place I least expected, and I don’t want to give any spoilers, so you’ll just have to read it yourself.

At its core, this is a story of two misfits. Park gets by in school, but feels like the odd duck at home, unable to live up to his father’s strict requirements. Eleanor wears armor in her zany form of dress as a way to look tougher than she is. Behind her wild hair and colorful clothes, is someone hiding a painful secret.

Together, life feels a little bit easier. But it also gets more real.

These characters tugged at my heartstrings.

I picked this book out for my book club to read when we decided to each pick a different genre. As I read a lot I didn’t have a preference on what genre I was assigned. But I admittedly know little about science fiction beyond Kurt Vonnegut, who was a favorite in high school.

I struggled with this book, as did my entire book club. I recommend researching the author and the book first as the history and symbolism built into the book made it more interesting to read.

And warning, it doesn’t get really good til about 100 pages in. So you have to stick with it.

This story takes place on the planet, Winter, where the people have no gender. Once a month, they enter a transition period called kemmer where they can take on male or female form and partner with another person. They have no choice in which gender they take, and could fluctuate from each one each time they enter a kemmer period.

The book has a lot of feminism between the lines. In a world where there is no gender, and all the people are on equal ground, there is no war. Two ideas which LeGuin played with in many of her works.

And what’s fascinating is that it’s written from an outsider’s perspective, Ai Genly, who is sent to Winter as an ambassador, in hopes of convincing their people to join the Ekumen – AKA what we know as the United Nations. The story follows Genly’s mishaps in communication and tactics because he doesn’t understand the people he is speaking with. Isn’t that very fitting for where we are in the world today? We all rush to identify and place people in social constructs we know and understand, without really understanding them at all.

If you can stick with it through the unusual names and long backstory, this is an interesting read. Certainly a thought provoking one.

What books have you recently read and enjoyed?
What books do you hope to finish before year’s end?