My friend Heather is a smart, lovable lady who doesn’t watch a lot of movies. Ask her if she’s seen something and the answer is probably no.

A month ago, however, she messages me and tells me I need to watch the show Twin Peaks, a cult drama I had never seen. She described it as a small town murder mystery. Ok, sure, I wanna know what happened to Laura Palmer, the dead girl. I’ll watch.

So I reserve what ends up being a season one and two box set from the library, and I message Heather when it comes in so we can have a social media shared viewing party.

Only I never hear back from her.

I message her via text, I try Facebook messenger, and I tweet at her. But if Heather is bad at having seen movies everyone else on the planet has seen, she is terrible at checking social media. Like working for the CDC is so hard, Heather? Check your messages! I have questions about this melodramatic tv show you made me watch!

So I watched all of season one and over half of season two without her. In a state of growing irritation.

I hate this show. Now all I have are questions.

I finally heard back from Heather. Her phone died and it took days to get a new one. This loss would unhinge a social media person like myself, but Heather just went on living her life, working by day, eating pizza rolls like a boss at night, probably sketching something amazing because she is a talented artist too.

So by the time I heard back from her, I had my own melodramatic show to air. I wanted to know why she made me watch this ridiculous show.

Here are the screenshots of our text conversation in which I tell Heather she is a terrible human being for making me watch Twin Peaks.

*Warning: if you haven’t seen the show, there are spoilers ahead.

This song is three minutes of teenage torture. Get your shit together, Donna! This is not a healthy relationship! 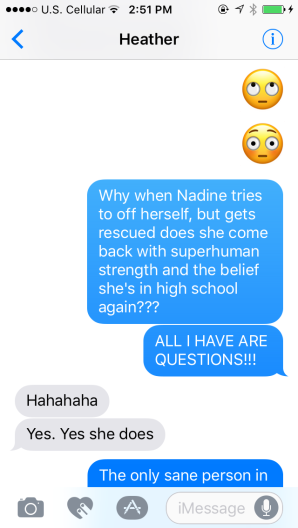 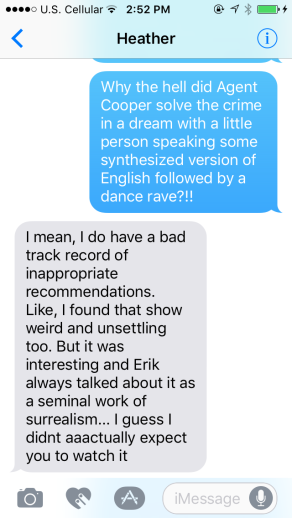 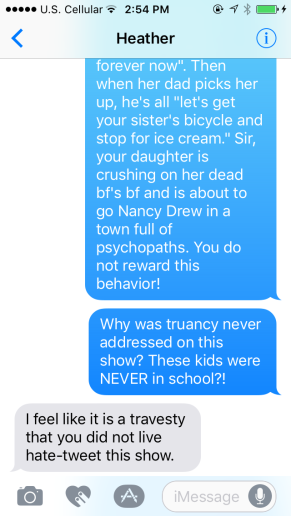 I have questions, people! And clearly a lot of disdain and anger.

And now I find out the show is being revived and airing on Showtime! People are eating pie and dream dancing all about it on Twitter.

Also Heather has stopped replying to my texts once again. I think the owls got her.

Your turn. What do YOU think of Twin Peaks?