The Highlights and Hiccups of our Grecian Honeymoon

Kah-lee-MER-ah, Everyone! (That means ‘good morning’ in Greek! And yes, I wrote it phonetically, because I do not have the Greek alphabet on my keyboard, nor would most of you be able to read it if I did not do so.)

Thank you to Misty and Deanne for keeping you all company while I was away!

Greece was magnificent! We thoroughly enjoyed our pre-wedding honeymoon (yep, it’s backwards thanks to Joe’s gig schedule, but I’m just happy we got to get away).

We started in Santorini, which was breathtaking. 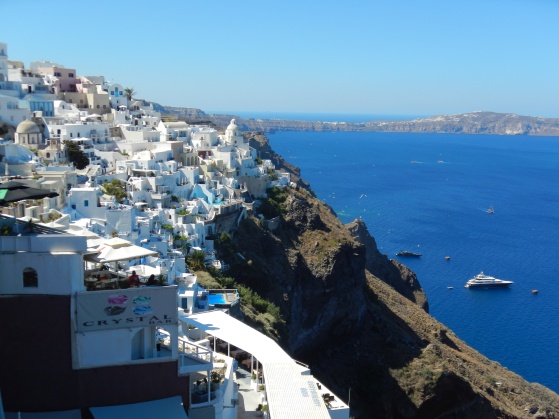 We stayed in one of the southern most cities, Akrotiri, which is the historical part of the island. It was quiet and scenic as our room overlooked the caldera, with Nea Kameni (the volano island) right in the middle. 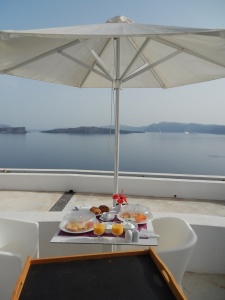 I miss breakfast in Greece.

We rented ATV’s a couple times and cruised all around the island, checking out the northern most city Oia (pronounced Eeh-ah), relaxed in Perissa on the Perevolos black sand beaches, and headed down to the southern tip where we watched the sunset from the rocks around the lighthouse.

Our next stop was Athens. We left the beaches and wineries of Santorini for the Capital city. We got lost – in a good way – on the streets of the Plaka. We buzzed about Adrianou Street and ventured out to dine in street cafes where we listened to local musicians and stared up at the Acropolis.

On one of the hottest mornings of our trip, we trekked to the Acropolis. And it was totally worth the heat.

Behind us is the Parthenon – the Temple of Athena, Goddess of War and Wisdom, and whom Athens is named for. The temple was completed in 438 BC. 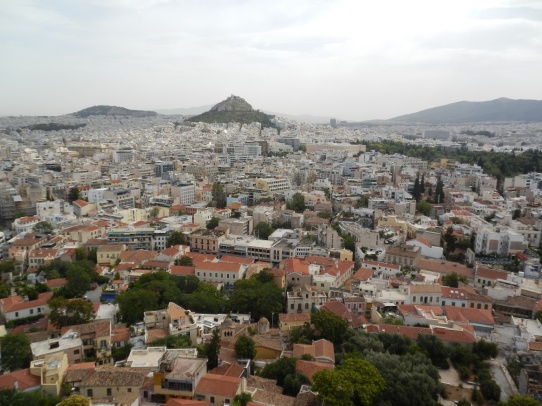 We visited the National Archeological Museum, the largest in the country. My favorite room showed the items and murals found in ancient Thira (Santorini) in the ruins of Akrotiri – an ancient trade port that was covered for centuries by volcanic ash and uncovered in the 1800’s. We walked the ruins in Akrotiri, and had to wait till we got to Athens to see the murals that were recovered there.

Did you all read Deanne’s guest post about the Greek Changing of the Guard? We did see the Evzones. 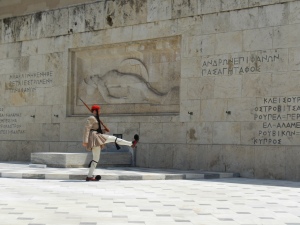 We had a date night at one of the most famous outdoor theaters, Cine Thissio, which was built in 1935.

And of course, the FOOD was amazing!!! 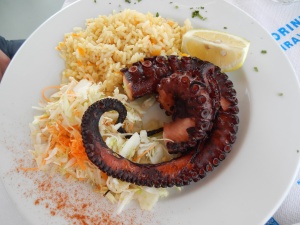 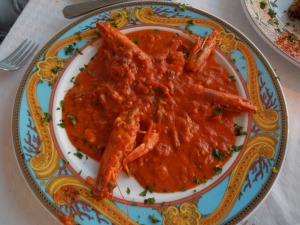 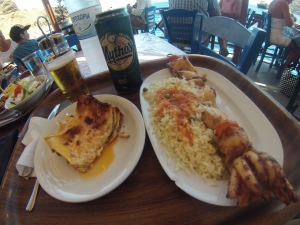 1.)  Shockingly, I’m sure to you all, we only got kind of lost one and a half times. The first was after our ship docked in Piraeus and we had to find the metro to connect to Athens and check into our hotel. This was all after 9 o’clock at night, so it was dark out and there weren’t any signs for the metro that we could see.

We basically got there by meandering the city and following some other tourists for a bit, all while dragging our luggage along. We were hot, sweaty messes when we finally checked into our hotel. Oh…and I had what I thought was motion sickness, but ended up being vertigo, so I threw up a bunch that night!

2.) Yes, I got vertigo – actually still have vertigo – and that made touring Athens interesting. We had to take several breaks throughout the day for me to sit and cool down and start believing the walls and pavement were not in fact coming after me. For the record, vertigo sucks.

3.)  The second time we got lost was our first full day in Athens. We had a map of the city, which was in English, but once you venture away from the main streets of the Plaka, most street signs are only in Greek, so the map didn’t help a ton. And it was also 99,000 degrees Celsius. Yes, Celsius!

We were literally wandering inside the very mouth of Hades!

4.) And this one is minor, truly. But, I did get me some sun poisoning in Santorini. As any good ginger knows, being in too much sun will cause one to self combust, and sauntering all over that beautiful island caused my arms to break out in some form of minor hive-age.

I paid a visit to a pharmacy in Fira where a very kind Greek woman helped me purchase what I hope was Grecian benadryl and anti-itch cream. The “Greek-adryl” box was entirely in Greek and her only counsel on the drug was to take it for 5-6 days. I didn’t know the dosage or whether the stuff was non-drowsy or what, so I resigned to only taking it at bedtime, wherein I seemed to conclude that it was in fact the drowsy version. It worked wonders on our final flight home in which Joe tells me there was some serious turbulence and a lightening storm that I completely missed. 😀

The anti-itch cream made me laugh as it was in Greek and Grenglish? My favorite part of the tube is where it read that the cream helps with “the itch of elderly people” followed directly by “contact with jellyfish.” It was most comforting to know that if I came in contact with either an old person or a jellyfish, I was covered itch-wise.

That’s our story! All in all, a very happy honeymoon!
As they say in Greece, “Cheers” or “Yah-mas!”

Ready to do a helmet wearing PSA if asked! 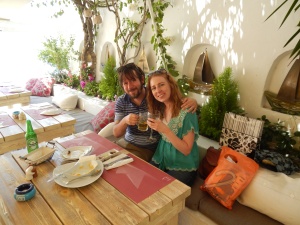 What do you mean you don’t see it, Mark? It’s right THERE!
Spending my weekend doing one of my favorite things, writers conferencing. First time attending the #TaosWritersConference (virtually) - learning, studying, playing, creating poetry and lyric prose all day long! Let’s do this! ✍🏼
Who else is ready for the weekend? Tell me what you’re looking forward to. I’m planning to get outside for a hike and then attending a virtual writers conference. Good for the body, good for the mind. 🥾📝
Ok, it’s not his birthday, or our anniversary, but this guy rarely lets me take his picture and I just have to gush a minute how much I really like him. I’m super lucky that I get to go on adventures with this dude and have in depth conversations on random things like the musical stylings of Christine McVie vs Stevie Nicks, the early espionage career of George Washington, how the enslaved cook of Thomas Jefferson, James Hemings, is the reason we have mac and cheese in America, and how this guy managed to - for the FOURTH time - unknowingly book a haunted hotel for our trip. 👻 Despite my lack of sleep due to paranormal activity, I really love you, Sir. That’s all.