Getting to Know Your Spouse’s Alter Ego, or Adventures of the Grumpy Pumpkin

A guy I met once on a wine tour/bus trip shared this fact about marriage with me:

Marriage. It’s not all pixie sticks and butterflies. ~ Mitch

I thought that was rather prolific and true. Sure it came from one newlywed to another, so neither of us really had that much experience in this whole married life thing, but I agreed with him.

Not more than one hour later, Mitch also asked about my husband’s and my plans for having children, a natural step after marriage, but I felt it was a little soon to be discussing plans for my uterus given we’d: 1) just met, 2) had been drinking copious amounts of wine, and 3) it’s my uterus and none of his business. Thank you very much. (My mama raised me with manners.)

Still, this Mitch guy had a point. Marriage is not all pixie sticks and butterflies. Sometimes the person we love, the very individual we picked out of all other individuals – like ones who know how to clean up their beard hair trimmings or put the toilet seat down *swoon*– sometimes they morph into something else. Their alter ego. 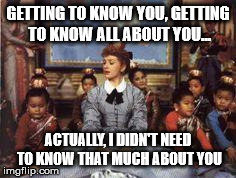 Getting to Know Your Spouse’s Alter Ego

My husband has an alter ego. He denies it because I can’t remember the name we gave him, and if I can’t remember his name, then he doesn’t exist. But we wives all know that’s bogus. It’s BOGUS I tell you, Joseph Judgey McBelchins!

My alter ego has long been named. She goes by Grumpy Pumpkin. Which sounds adorable and cute and quirky, but that’s what makes it so annoying. It’s all very Anne-of-Green-Gables-“He-called-me-CARROTS!!”-esque.

I maintain I am not the only party in my household with an alias. But until He Who Shall Not Be Nicknamed gets an identity, I can’t call him out on it.

This is where you come in.

Here are some helpful examples of things that lure his bad boy out:

So, I’ve created a poll with some potential names for my honey’s alter ego.
Vote for your favorite! Or better yet, write in your own!
Does your partner have a cranky alias? Do tell!