Anthony Bourdain Day: What the Chef, Author, and Travel Guide Means to Me

Today is #BourdainDay. In honor of their friend on his birthday, chefs Eric Ripert and José Andrés are asking people around the globe to celebrate what Anthony Bourdain meant to them, and to us. Tony brought people together because he shared food – good food, cultural food, the art of preparing food, the act of sitting down with someone to enjoy food.

Like so many other fans around the world, I was heartbroken when I learned of Tony’s death on June 8th last year. I had been a fan from his early days of No Reservations. My husband and I both scour his collection of travel shows in preparation for any trip we take and always try to visit the restaurants, many of them small, family owned businesses, that he recommended. The first one we ever went to was Salumi in Seattle, WA. We got there early because we knew there’d be a line, and there was, one that stretched around the block. There were only two tables inside if I remember right, and you sit European style, sharing space and a meal with others. We ordered our sandwiches full of the shop’s own cured meats, and bought extra meat to take home. It was an exceptional, ordinary, simple meal.

When we visited Madrid, Spain, we hit up a place whose name I can’t remember. I don’t think it was on the outside of the building. It was a hole in the wall kind of place, again maybe five tables inside. We had the best plate of jamón y queso con juevos y papas fritas. It was small, it was simple, it was muy delicioso. We went there twice.

Tony brought joy to the act of eating. He believed there was nothing quite like sitting down to a meal with someone and talking. And he got, if you’ll forgive my pun, to the guts of the matter. I appreciated his willingness to discuss cultural and political topics on his shows. He knew that as a travel guide and host, he was both illuminating parts of the world for people, but also a part of their demise. He struggled with that. He was part of a crew that showed audiences mine fields in Laos, buddhist monk ceremonies in Thailand, and how to shoot a cobra’s heart in Cambodia. The very things that made people want to jet set away to someplace entirely new and different from what they know. And yet, tourism, as much as it can help a place, can break a place as well. I think that’s why showing the late nights, the locals, sometimes the underbelly, was so key to his style of travel. If you want to experience it, you can’t pick only the good parts. To appreciate it, you should learn from it. That kind of respect for the countries he visited is why I loved his shows, and why I was a fan of his.

I’ve also read several of his books and one of his cookbooks, Appetites, which I recommend if you’re a fan, as it’s full of the recipes Tony loved and made for his family. Like his show, his books capture the thrill of travel, the smells of the food, and the essence of the people he meets. He was incredibly observant to be able to portray these things so eloquently. A year ago in July, I hosted my book club and chose Tony’s memoir, Kitchen Confidential, as our book. I knew I loved Tony’s writing, but this book in particular hit a heartstring for me.

Kitchen Confidential is the story of how Tony became a cook, learning the ropes from a hard knock group of immigrant chefs in a tiny sea shack on the east coast. (The Portuguese sausage soup recipe mentioned in the book is in Appetites. I made it for my book club.) The book also follows him as he moves to New York and climbs the kitchen ladder into different roles. There’s a scene I love where he’s begging to be promoted before, he admits in the book, he’s ready. He’s talking to this hulk of a guy who grabs a pan with his bare hand and holds it for a second or two, his skin growing blisters, just to make a point. Until Tony can do that, he’s not ready to be a cook. And Tony’s like, that guy is crazy, but also, that is my goal now.

What I love about Tony, and that book in particular, is that he validates what it’s really like to work in a kitchen. Just as he did on his show, he illustrated the down and dirty parts of working in a hot, cramped kitchen, standing on your feet all day and sweating. My parents owned a restaurant for many years where my dad was the main chef, and reading Tony’s book was like stepping back in time when I would visit my dad at the restaurant. My mom and I would enter through the staff door, which went right into the kitchen, so a wave of heat would greet you. And like Tony talked about there are undocumented individuals or guys with foul mouths working in the kitchen. My dad gave second chances to a lot of people. Many of the guys who gave me piggy back rides or cracked jokes too loud in my dad’s kitchen were men that had served time or were down on their luck. They could be hotheads, but they were a family.

And so I hope that with all the TV shows, and the books, and the recipes left behind, we can stay connected. I hope his daughter finds a space within them and feels at home in the memories they offer, because that’s what he offered me through his book. I hope you enjoy them too. I hope you go out and grab some good food today, as his chef friends have suggested. It doesn’t have to be fancy, in fact, street food was more his style anyway. I’ll be doing that when I finish up work today.

To learn more about Bourdain Day, check out this post in Esquire with chefs Eric Ripert and José Andrés sharing memoirs of their dear friend, Anthony Bourdain. 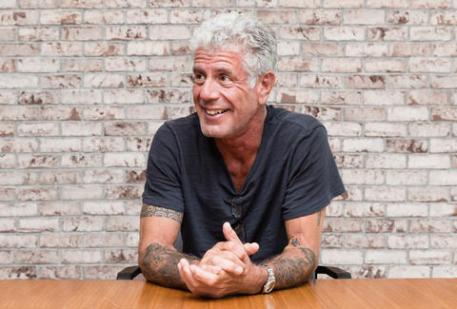 “I write. I travel. I eat. And I’m hungry for more.” ~ Anthony Bourdain