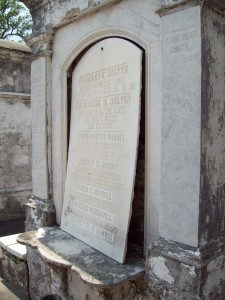 I have an obsession with graveyards.  I must have been a groundskeeper in a past life, although my paralyzing fear of insects contradicts that possibility.  Maybe I was an archaeologist?  I also like to look at bones.  In fact I have an uncanny ability to find bones in cemeteries.  And NO, I’m not digging them up!  I just wander where others don’t I guess and maybe move a rock here or there, but that’s a blog for another day…

The photos in this blog were all taken inside Lafayette Cemetery in New Orleans, LA.  The Lafayette Cemetery is located in the Garden District of NOLA, which took me a half hour bike ride, a 10 minute walk through the French Quarter, across Canal Street, one streetcar (the green line), plus walking 15 more blocks to get to.  Might I suggest a driver?  Or at least a bigger map?

In my previous post about the St. Louis Cemetery No. 1, I explained about the four kinds of tombs located in the graveyards and showed photos.  You can check out the history about that graveyard here. 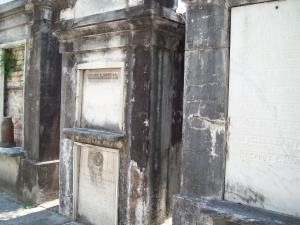 Most of the tombs in Lafayette are family and society tombs.  I think the wall tombs here are some of the longest as well.  The markers for the tombs can be really interesting to read.  Some are sad, you’ll see tombs where a family’s children have all passed at young ages.  However there’s also a tomb in the corner where one man’s first and second wife are buried with him!  Crowded much?

In the St. Louis Cemetery post I also talked about the difference between restoration and renovation when it comes to preserving these crypts.  Just like the Save Our Cemeteries organization, Lafayette is part of a research project that involves mapping, tomb and name listings, and historical exploration.  For more information about the Lafayette Cemetery Research Project, check out their site!

I think one of the most fascinating things about this cemetery is the diversity within its walls.  It was built on property owned by a French plantation woman in the 1800’s, Madame Livaudais.  Since its French beginnings, it has come to be the final resting place for Civil War soldiers, Creole Americans, German immigrants who became merchants and entrepreneurs in the New World, and the Irish immigrants who did all the dangerous labor of the day.  It even houses a few families of African descent.  Because of this, the cemetery remains non-denominational.  A side note of which allows Lafayette to be filmed for movies, television, and documentaries.  The Catholic Church has forbidden further filming in the St. Louis Cemetery after Peter Fonda’s LSD trip in the film, Easy Rider took place on one of its society tombs. 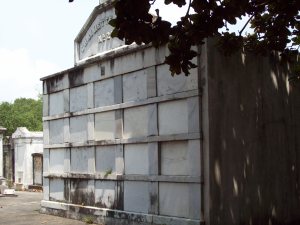 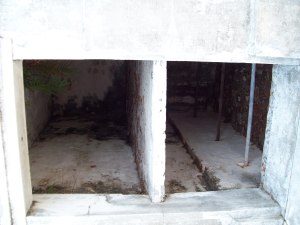 Looks cozy, no?  If you’ve ever heard that New Orleans crypts are “Nature’s Crematorium,” that’s not exactly how it works.  I did learn that New Orleans uses wooden coffins to this day to place the bodies in the crypts, but they don’t really cremate inside them.  It would have to get MUCH more hot inside them.  These tombs are more like a crockpot, hot enough to decompose over time, but if you only want your ashes left around, you really ought to opt for the fire.  Tombs still in use remove the markers, break the plaster wall, and bag any remaining bones for DNA purposes, and then sweep the bag into the back of the tomb where it drops into the pit.  This practice allows generations of families to be buried together.  It’s not uncommon for some of these tombs to hold more than 40 people.  Imagine the family feuds possible over that timeline! 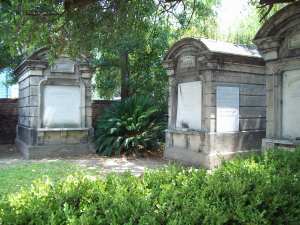 There’s something beautiful about the variety of graveyards we have.  The architecture, the historical significance, the climates and locations they’re built upon, the people inside all hold such interest.  I haven’t met too many people that aren’t interested in cemeteries; it’s anthropology when you think about it.  To think the crypts of New Orleans began as a solution to burial problems of the sandy, swampy, below sea level city have now become a major tourist attraction and warranted preservation societies like the Lafayette Research Project and Save Our Cemeteries.

What do you think?  Do the variety of burials in our country interest you?  What about them?