ERMAgawd: Why You Must Take Risks and Find the Funny

Ok, y’all know I love me a good writers conference. After I left a career in corporate sales to be a writer, I made attending writers conferences part of my ongoing education goal. I’ve attended at least one a year since 2012. 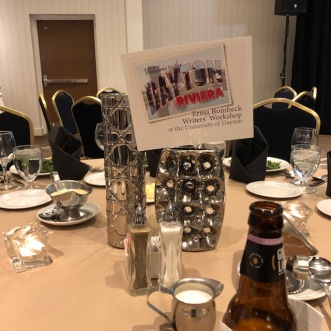 Well, this year something magical happened. I GOT INTO THE ERMA BOMBECK WRITERS WORKSHOP!

ERMA BOMBECK, FOLKS! ONE OF THE FOREMOTHERS OF FUNNY!

The Erma conference happens every two years, and the last two times I tried to get in, it sold out. No joke, this conference sells out faster every year, like in four hours or less.

So this year, I marked my calendar, I had my morning off, I was holding my credit card in hand with my laptop and my phone ready to GO!

And then, I flew to Dayton, Ohio and proudly wore my newbie sticker that said “Erma Virgin”. Yes, that is what they gave us. Be still my humor-loving, former Catholic heart.

I’ve been to some stellar conferences and always left inspired, but there was energy like you can’t imagine at this conference. (In fact, the organizers said this was the highest rated conference to date!) I got my schedule, planned out where I was going to go, and then immediately threw that out the window, tried something new, made great friends, and gave it all my best!

ERMAgawd, here’s why you should go!

You all know I like to say yes to new experiences, but being the newbie here, I was admittedly nervous.

A fair amount of the workshop focused on stand up comedy with the hilarious Wendy Liebman. Wendy’s been a stand up comedian for over 30 years. She’s performed on Carson, Letterman, Leno, Fallon, Kimmel, and been a finalist on America’s Got Talent.

It seemed like everyone was talking about the stand up classes. Everyone I met was trying stand up or working on their bits. But I had no intention of going. I’m not a stand up, so that’s not for me.

You guys all know I went, right? LOL

I had planned what workshops I was going to attend the night before they started, and that was the last time I looked at that list. If the stand up classes were getting all the buzz, then I decided to go and see what I could learn from them. After all, I like working in different formats because it teaches you new things about your writing.

After the first class listening to people tell jokes, my gears just started rolling and I spent that night coming up with some material. So the next day, I got up with a bunch of other brave, risk-taking people and did a minute of stand up. And I got laughs! Good ones! That is a very good feeling. One that I’m interested and willing to try again! All because of a risk.

A risk, and the ever delightful and supportive Wendy Liebman, who just happened to be on the same flight to Chicago as me, and who gave me wonderful feedback and encouragement while sitting at our departure gate despite the fact that it wasn’t even 6am yet. Bless you, you’re so kind and charming, and I’m eternally grateful.

The other classes I attended were about finding the funny, whether it’s using it to add heart or get through hard times. Or even just on Twitter.

I want to know whose turn it was to pick the station at the airport today because I’ve heard three Joan Jett songs before 6am, and at this hour, I’m not sure I *do* love rock n’roll. #2018ebww

One of my favorite workshops was with Lauretta Hannon, author of The Cracker Queen. She had a lot of great tips on being comfortable with writing your story, even the dark parts, while being ok with yourself in the process. I can’t wait to read her book after she shared some examples of how to use humor to write about the tough stuff, and also where to let the dark moments speak for themselves, because we know not everything we go through will be funny.

Both Lauretta and T. Faye Griffin, another presenter, reiterated that making people laugh is a gift. Some of the best writers out there have the ability to make you feel something or learn something, but do so through humor, and that is a very special skill.

It’s kind of mesmerizing to me how many different ways there are to be funny. You can do stand up, you can tell a story, you can caption a photo, you can come up with a punchy headline, you can tweet just to name a few. If there was one takeaway from this conference, it is that “funny” is all around us, and we have the skill to shape it.

I’m so grateful for this opportunity. The crowd at Erma is one of the most supportive I’ve ever seen, which is appreciated because I took one other risk while I was at the conference and signed up for Pitchapalooza, “the American Idol of books”.

In a room of roughly 100 people, I put my name in a hat that probably had at least 60 of those people’s names in it. Only 12 were chosen and I was one of them. I got to pitch my book for one minute to a panel of judges and get feedback on my pitch.

I swear I thought the audience would hear my heart beating through the microphone, but I had practiced my pitch beforehand and gave it my all. I didn’t win the contest. (Way to go, Liz Dubelman, who did win! She was the first person to say hi to me at the conference, so I have a soft spot for her as a human being. Thanks!) I got really positive feedback and simple tweaks to improve my pitch, and was even complimented on my performance! And that’s a win in my book!

So there you have it, taking risks and finding the funny is what Erma is all about. I’m so glad I could attend and so grateful to the conference organizers, presenters, the keynotes (btw, I hope I wasn’t the only one who noticed all the female keynotes got standing ovations), and my fellow attendees. I’m still riding the highs and energized by all of you! 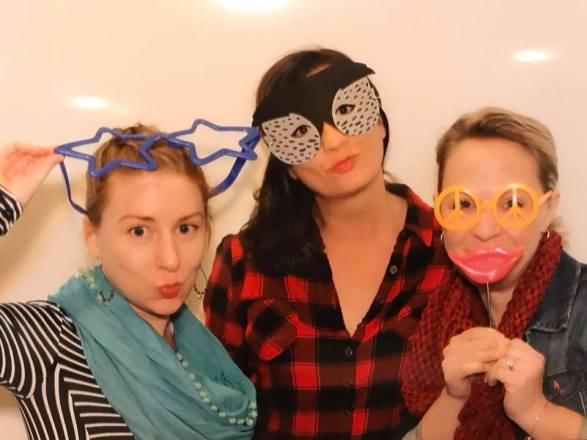 What are you currently learning about your writing right now?
What’s inspiring you?