Hello Friends!  It’s great to be back in paranormal Wisconsin!  My week of vacation was full of good weather, helpful maps, easy to ride transit systems, excellent meals, and minimal arguments, which is all rather unusual when you’re traveling with me.  No scars.  😀  I did however keep tradition with the hidden wine portion of the trip.  Shhh, it’s in the coffee cup.  He he he.

My honey and I spent a wonderful eight days in Toronto, Ontario, Canada.  Things were looking bleak when there were three days to go and I still hadn’t received my passport.  I was planning an elaborate theatrical performance of tears and whimsy whereby I convince Delta Airlines to PLEASE fly me and my boyfriend anywhere in the U.S. for eight days had that passport not come through.  But thankfully (for everyone), it arrived Friday and we left on Sunday.  Toronto is an amazing megacity, made of four or five smaller cities originally.  It now holds 2.6 million people in the Greater Toronto Area from 96 countries and speaks over 140 languages and dialects.  I loved this!  I never saw the same kind of people, it was so different and exciting, this big mix of everyone.  We were sure to take advantage of the FOODS available.  We ate curry, italian, asian dumplings, and drank lots of Canadian beer.  Hey, we’re from one of the drinking capitals of the world! 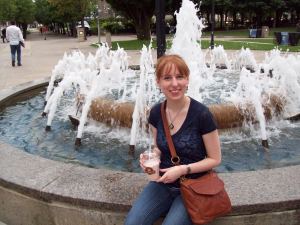 Outside the Toronto Civic Center, first night in town.

Our first day we became familiar with the city.  We walked around the harbourfront, through Eaton Centre-one of the largest shopping areas in the world, and would continue on to visit the ritzy Bloor-Yorkville District of high end shops and the Royal Ontario Museum, the Entertainment District, and of course the historical Distillery District.

Toronto is actually a major film site and home to many in the film industry.  While we were there, we passed crews several times filming the remake of Total Recall.  Believe me, ladies, I kept my eyes peeled for Colin Farrell, but I didn’t see him.  The film crew did get us pretty good one day.  We were walking up the steps from the subway and looked out the doors to see it raining.  We were groaning and whining because when we stepped on the subway it was just fine.  A guy standing in the doorway started laughing and waving us on, it was the film crew using FAKE RAIN outside, and we had to walk around.  Those silly special effects guys!

Another must-see stop was the CN (Canada’s National) Tower.  One of the seven wonders of the modern world, the CN Tower is the third tallest building in the world at 1,815 feet.  The elevator you ride up has glass doors so you can see the city as you go up.

Sunset around the CN Tower's Skyline

We decided to go up to the tower at night and view the city lights from the observation deck.  The tower also has a glass floor in one area.  I did not want to stand on the glass floor!  It took several embarrassing moments of coaching with Joe going “Look at me!  Look at me!  Don’t look down, look at me!” before I edged onto the floor and quickly ran off again.  I was not about to pose for a picture!

Joe rubbing it in that he's brave enough to hang out on the glass floor. Big deal!

I was fine on the deck, checking out the city lights, finding the buildings I knew below me.  I just didn’t need a visualization of me falling to my death by splatting across them, cause you know, my track record’s not so good.  *rubs the scar on my nose*

Overall, I loved Toronto!  Truth be told, I love every city I travel to, I love to travel.  It’s a chance to see and taste new things!  Speaking of tastes, have any of you heard of ice wine?  Ice wine originated in Germany, but is mass produced in Canada because the climate is better suited for it.  It comes from grapes that been frozen at about 14° F for three consecutive nights.  Those grapes are harvested late in the night and immediately pressed.  The water inside the grapes has frozen, so you only get about 1/10th of the juice you would normally get from a grape bunch, but what makes it special and worth all the hard work is that the sugars inside the grape have reacted to the cold in a way that makes these juices sweeter.  So, ice wine is dessert wine, more common with whites, but also done with reds.  Joe and I did a tasting at the Niagara College Winery, a new school where students learn to be brew masters.  Impressive, huh?  We did end up purchasing one bottle, it’s a bit on the pricier side because it’s more difficult to come by, but it was an after dinner treat for us one night back at our hotel. 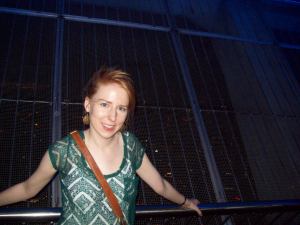 Hanging onto the railing outside on the observation deck of the CN Tower. It was windy!

That’s some of the highlights.  It was good to have a vacation and spend time with my guy, if you knew how difficult it is to get him to take time off, you’d know how much our vacation week means to me!

What were you up to while I was away?  Tell me what I missed!  And please post your favorite blog posts written in the comments section.  I promise to visit all links and comment back for you.

See you Friday for another fascinating and friendly edition of the #LifeListClub.  Diana Ligaya will be guest posting at my place, and I’ll be over at Violeta Nedkova’s.  Check out their blogs and the other Life Listers by clicking their names in the Life List Club sidebar.  See you then!