3 Lessons Learned From the Listen To Your Mother Show

I can’t believe it’s been a week since show night already. I was working on the La Crosse production of Listen to Your Mother for six months. How can it be over already?

If you haven’t seen the bombardment of social media posts I’ve been doing about Listen To Your Mother (), then you probably aren’t following me on social media, and you should because I like you.

Listen To Your Mother is a live, storytelling event that gives motherhood a microphone. The last shows have taken the stage, making the collection of 500 some unique, truth-telling stories, take place across 41 cities in North America.

It has taken me awhile to fully process what this show and its aftermath have meant to me. I’m still exhausted! But in the best possible way. Kind emails and handwritten notes are still coming in thanking our team for a beautiful, magical night of storytelling, for voices being heard and diversity represented. For making them laugh – so many laughs. And also for the tears.

So many inspired souls have said they’re going to audition next year!

And final numbers are in, so I cut the donation check for YWCA La Crosse today!!!

Here’s what I can sum up for you.

3 Lessons Learned From the Listen To Your Mother Show 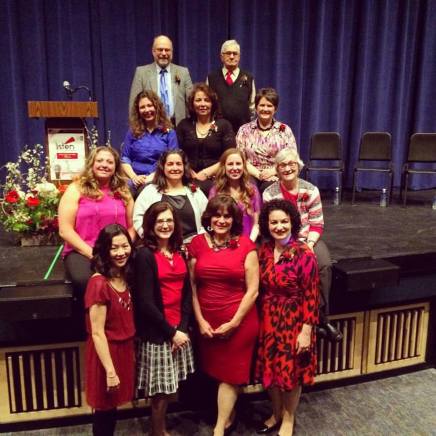 When I first had the itch to apply and bring LTYM to my city, I had an entirely different production team and charity lined up. I also had a different job. When things went from bad to worse at that job (sometime I’ll tell you about it), no one was willing to put in the work anymore. But I KNEW this show could be amazing. I KNEW there were stories out there that needed to be told.

So, I did it myself.

I lined up a new production team, one that believed in the power of story like I did. And I found a new charity, one that said yes instantly and supported me from staff to director to board member. And I wrote up an application I hoped would make it really, really hard for the national team to say no to.

Channeling my energy into something that was positive and making a difference in the community saved me. Working on this show encouraged me to make big changes in my life because we all deserve to feel heard and appreciated and energized.

2. My Husband is Proud of Me

The hubs, out to dinner, meeting the cast for the first time after our tech rehearsal.

Let me tell you the ways my husband supported me. And, I’m warning you in advance, I’m going to get mushy about this.

In the beginning, it was advice on production stuff – venues to look at, performance things to think about. It helps he’s a musician and very familiar with locations. Then it was social media shares with the obligatory “Here’s this thing my wife is doing”.

Next he went and offered to play live, acoustic music in the lobby for show day! Because he saw how hard I was working and wanted to support me in the best way he knew how, he helped make our debut show a little more special – a little more like a fancy night out on the town.

But folks, what really made me tear up and get “the feels” so hard was his response to the show. You see, I didn’t come home from rehearsals and talk about the show. I probably mentioned how many things I had to do for the show (more than once), but I didn’t tell anyone about the stories we shared. That magic and trust needed to be saved for show night. So, my hubs was that guy who got roped into attending because his wife was the one running it. Storytelling is not exactly “his thing.”

The reason I know the LTYM show is a gamechanger of a production is because it gets people talking. And my husband started talking and sharing his thoughts with me about the show and the stories he heard. And not just that night, but all week long.

My husband is not a big talker. He does not often share his emotions. Not many guys do. But after watching the show, my husband told me he saw me making a difference. He called me a rockstar. He had thoughtful, personal things to say about the show’s stories. He said he was motivated to make changes in his life. And he told me he was proud of me.

I told you, this one gave me ALL THE FEELS. I am so grateful for his support.

3. Perspective: Your Girlfriends’ Gonna Give It To Ya 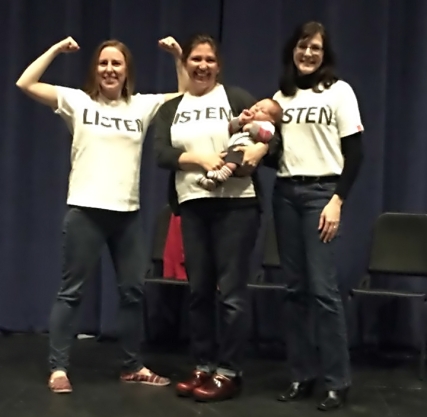 When you work with talented people, you up your game. When you collaborate with them, you make lifelong friends.

I am eternally grateful for the amazingly cohesive production team that agreed to work with me without fully knowing how much work it would, in fact, be. I admired these women before the show production started, I have deep respect and awe for them now.

From start to finish, this group came in fully understanding the special-ness of a LTYM show. They appreciated and honored every story we heard in auditions, they put in countless hours of time away from their own families to work on the show and get to know our cast. They found local sponsors, made food for the cast, and helped make this show come alive.

We also had the help of our national LTYM team. All of whom are amazing mentors who know HOW TO RUN A SHOW that stretches its performances across a continent!

When little things seemed big or something made me worry, these women had my back. They responded quickly and succinctly and put everything in its place. They believed in me and one another. They support the kind of world I want to live in. I’m so proud to work beside them.

So, when next year Mother’s Day rolls around, run don’t walk to the nearest Listen To Your Mother show near you. Apply to bring it to your city. Audition. Get inspired. This show changes lives.