Happy #HungerGames, and May the Odds Be Ever In Your Favor!

First up!  The winners of two recent blog giveaways!  Winning the copy of Jody Hedlund’s new book The Doctor’s Lady is Justine!  And the winner from the Life List Club Milestone Party and receiver of an iTunes Gift Card and blog swap is Bethany Wiggins!  Congratulations Ladies!!

I did it.  I saw The Hunger Games movie.  My weekend was a little more fulfilling knowing I had the inside scoop on all things Katniss Everdeen!

Katniss played by 2010 Oscar nominee (for her role in Winter’s Bone) Jennifer Lawrence, was amazing as the renegade heroine.  I really thought Lawrence did an awesome job embodying Katniss’ struggles throughout the competition.  Her leading men, Gale, played by Aussie actor Liam Hemsworth and Peeta, played by Josh Hutcherson were also good pics for their role.

Now for the Guts:

The fact is I am an adamant proponent of seeing the film first!  I know, I know, many of you are gasping for air right now.  But that’s the way I do it.  I see the film, and then if I really like it, it makes me want to read the book.

Here’s why:  When you see the film and then read the book, you like the changes, it’s exciting, you learn more, the characters are developed.  But do it in reverse, and you come out disappointed, because the book is always better!

So what did I think of the film version of The Hunger Games?  I liked it a lot!  I really did. However, it’s incredibly difficult to fit as much backstory and symbolism and characters as are in the book into a 2+ hour movie.  They did a great job!  But I came out thinking the book is so much better.

The Pros of the Games:

1.  Effie Trinket’s Make Up – I will make this look happen, just you wait!

2.  The Arena – Great set work using the woods and intense shots during the fire scene and battles.  *Note:  try to avoid sitting too close to the screen, the theater was packed when we went and we got a little motion sickness.

3.  The Romance – For those of you speculating that this is just another Twilight, stop!  The love triangle may be there, but it isn’t presented in a puppy love, mopey teenager kind of way.  It’s life or death with the cameras watching!

Who will she choose? 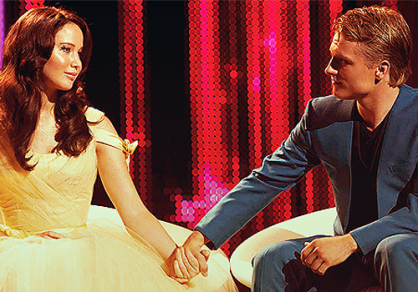 Katniss and Peeta? (source: the hungergames2012.files.wordpress.com)

The Cons of the Games:

1.  Where’s the Mockingjay? – For people who haven’t read the book, it won’t be a big deal.  But I was saddened by how little explanation or meaning went into the story of the mockingjay.  My guess is we’re in for some serious flashbacks/backstory come time for the sequels.

2.  President Snow – I adore Donald Sutherland, who plays the evil dictator Snow.  However, he’s almost too laid back as Snow and while he’s creepy, he’s just not as creepy as he is in the book.

If I had my dream casting, I’d pick Kevin McCarthy from the 1987 film Innerspace, which is hilariously awesome if you’ve never seen it.

Overall, given the time limits I’m sure they had, they put together a good movie with some great actors, Jennifer Lawrence in particular.  I’d watch it again!  I recommend you see it!  But know, you’re gonna like the book more!

My review of the book  and author research can be found at The Hunger Games: Best Lack of Sleep You Ever Had.

Sara Grambusch and I did some blogging editorials on Katniss’ Journey as Heroine and Team Peeta vs. Team Gale!

Ellie Ann Soderstrom offers us a critical look at the writing of The Hunger Games.

AND, you know what else?  There’s a little heated battle going on about the question of plagiarism because Suzanne Collins’ Hunger Games bares striking similarities to Japanese novel Battle Royale.  Maggie’s Bookshelf shares more information about the similarities here.  Check it out!  It’s an interesting discussion.  I’m leaning towards the “not plagiarism” viewpoint, because if you’re going to point out Battle Royale, we may as well also toss Lord of the Flies and A Most Dangerous Game in there as well.  Or any dystopian novel where the theme is about corruption of power.

But that’s just my opinion.  Tell me what YOU think!

And, it wouldn’t be a movie post without a trailer!  This video has all 4 trailers of the Games on it!

Yesterday it was 21° F in Wisconsin.  There’s snow on the ground and my car’s keyhole is constantly freezing.  I’ve managed to perfect my juggling of purse, tote bag, coffee, keys, and de-icer spray bottle by holding the cap in my teeth on my way out each morning.  Needless to say, it’s chilly here.

So when life throws frost your way, what’s a girl to do but enjoy a little old school romance?

It’s like Edward vs. Jacob all over again, but better!  Honestly ladies, these are some great guys.  So let’s talk about them!

If you haven’t yet read The Hunger Games by Suzanne Collins, you’re missing out.  The trilogy is a very fast read, you won’t want to put it down.  The books in order are The Hunger Games, Catching Fire, and Mockingjay.  The story is placed in the future where a post-Apocalyptic North America is made up of 12 districts surrounding one Capital.  Every year, the Capital hosts the Hunger Games, a televised fight to the death consisting of one boy and one girl from each district.  Collins writes dystopian society as well as George Orwell in my opinion, or Aldous Huxley, who were two of my favorite authors growing up.  But now, if we asked a group of young adults to all read 1984, or Brave New World, I’m guessing there would be some groaning.  Ah, but The Hunger Games has two things on its side:

The first is one bad ass protagonist, Katniss Everdeen, a rebel in her own right, and destined to be a symbol for the nation.  Bonus:  Sara Grambusch is writing all about Katniss’ journey as heroine on her blog today!  Check it out!

The second win, which I’ll be focusing on, is the boys!

Collins has taken two extremes right out of the High School walls and placed them into Katniss’ life.  The first is Gale, tall, dark and handsome.  He is Katniss’ only good friend and they are hunting partners.  So Gale is the equivalent of the athlete friend who pushes you to be your best in the game.  And of course, he’s got amazing abs.

Then there’s Peeta.  Blonde, blue eyed, and kind.  Peeta once saved Katniss’ life long ago, but they’ve never spoken since.  He and his family make a living as bakers and Peeta knows how to do all the decorative work.  So if Peeta was in High School today, he’d be the quite but adorable boy in art class who pines for the alternative girl.

You have to read the books!!!  The situations that Collins places her characters into will make you think twice about what kind of person they are.  This goes for Katniss too.  Through their actions and responses, the author lays out a very interesting look into war and survival.  This may even be a great book to read with your young adult children to get them talking about the topics discussed in the book.

Plus, you know how when writers talk about plotting, and they ask you what’s the one thing your character would fear most, now make them do it!  That’s every book in The Hunger Games trilogy.  Collins will repeatedly push everyone into situations they DO NOT want to go into, but they must every time.  The reason I think that works in her books is because the implications that will happen if the character doesn’t have to do with people’s lives and their relationships.  I hated the book, Hatchet by Gary Paulson when I read it in middle school because the main character was constantly in battle with nature or the next catastrophe.  It didn’t seem believable that so much could happen to one person.  In using other people to weigh on the character’s decisions, Collins nailed this!

See for yourself in the new trailer:

Your turn!  Who are you rooting for?  What other literary characters are keeping you warm this winter?  Can’t Get Enough Hunger Games?  Good!  Read Sara’s blog too!