Mastering the Art of the Semi-Plot: A Tale of Plotting Gone Graveyard

Today my goal was to outline my entire story.  From beginning to end.  A bold task that required getting up early and focusing by planting my butt in a chair for the time it takes to drink a venti passion tea.  Three hours later (I savor my drink, ok?…I got lost in social media, ok?), I had at least figured out the “want, motivation, but” for my protagonist, that wasn’t difficult.  But I got stuck on my antagonist!  I know what he wants, but I have no motive, and without that motive I can’t outline major turning points!  Damn it all to hell!  Excuse me, I needed to get that off my chest.

If I lost some of you at “want, motivation, but” it’s a plotting tool I learned at the Writers Institute by the wonderful Lori Devoti.  Lori is a paranormal romance author and if you want a great deal on e-books, she’s running one on her blog right now.  What Lori showed us at the conference is a chart where you list what your character wants, which needs to be the goal of the story so it has to allow growth in your character.  For example, someone’s goal might be to save her marriage.  After you’ve named the goal, you have to know the motivation behind it.  What is it that drives the goal for the character?  What is the best thing that could be if they get their want?  And finally, you put the BUT in there.  The obstacle that prevents them from achieving their goal.  For example, if the goal was for the character to save her marriage, but her husband dies, her motivation and goal become something different, possibly about creating a better life for her child.  Lori’s advice was to draw up this chart with the protagonist and the antagonist side by side because as much as you can pit them against each other with conflicting wants, motives, buts, then the easier it will be to plot them against each other.

Today my problem is that I haven’t figured out my antagonist’s motive yet.  So I decided to stop staring at a blank piece of paper and definitely STOP getting lost in social media world, and do some research for the book to get my brain spinning again.  So, I spent the better part of an hour walking through a graveyard.

Part of my walk in the Oak Grove Cemetery

No, no, this wasn’t a suicide mission.  Not in the slightest.  It’s the main setting of my story, and I thought a stroll through my character’s world would help clear up the muddy bits.  Despite the fact I had to hide my camera from the protective groundskeeper who kept driving past me while I sauntered around, it was a productive visit.  I got several great shots that will help me create scenes in the graveyard.  And best of all were the names!  Many of the graves in this cemetery are from the 1800’s and the names and variety in the tombstones was something spectacular to see.  I also found the FREAKIEST tree that may or may not make its way into the story (I’m almost too creeped out to write about it).

I still haven’t quite nailed down a motive that doesn’t leap beyond the borders of “yaah, right, Witkins!” so I’ll keep working on that.  But I still consider this a productive day that will help me when I am scene building.  I mean, look where I was! 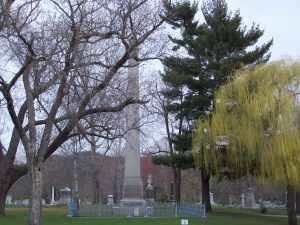 I like the way the different kinds of trees overlap here. Each a different color and texture.

What do you think?  Any advice for this stuck writer?  What helps you sculpt your characters and outline better?

Also, don’t miss out on a chance to win a free book!  Read my review of The Prime of Miss Jean Brodie, leave a comment, and you’re automatically entered to be a part of the World Book Night Giveaway!

Negotiating with the Dead 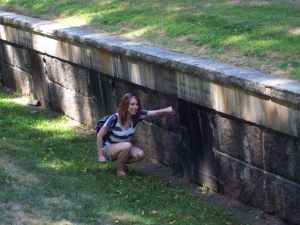 Come out, come out, wherever you are!

A Letter to My Protagonist:

Honestly, where are you taking me?  I’m afraid our initial journey into the cemetery has gone beyond what we’ve discussed.  I know, I know, your friends are missing.  I want them back too, but maybe they’re not the ones meant to help you through this.  Maybe in this underworld you seem to have traveled to, you’ll make a new friend.

Oh, I forgot, you’re only in an underworld because one of your friends got you to break into an old man’s house, steal some of his paperwork, and then confront him in the graveyard, where he ate you.  Hmmm…

Clearly, it is time to make a new friend if you wish to survive.  Together, we’ve made it past the ghosts with the rolling heads.  We’ll make it through the snowy road of angels, too.  Just don’t touch them, everything they touch turns into frost.

That’s it, Lydia!  If you don’t start to listen to me you’ll never make it out of the labyrinth.  I mean it.  Quit running.  We can figure this out together.  I’ve kept you safe so far, and it’s a miracle I haven’t told your parents where you’ve been creeping to at night.  Yes, I know threats are childish!  Fine, don’t stoop to my level.  Oh, go ahead, stick your tongue out, see where that stubbornness gets you.  Maybe you can hang out in the mausoleum for another page!

I’d really like you to tell me where we’re going.  When you’re ready to stop acting so childish (and no, I don’t care that you’re only 8 years old), I’ll be in my room.

the Cryptkeeper, I mean Author