The Mayflower: A True Story, and One You May Not Know

The Mayflower by Nathaniel Philbrick

For those of you busy prepping for the Thanksgiving holiday, making mad dashes through the grocery store, stocking up on cans of pumpkin like it’ll never be back again, may I ask that you sit a moment and learn the true story about the people who sailed from England to the New World and how they came to know the natives who lived here before them.  If nothing else, you’ll have a great conversation starter for your Thanksgiving table and everyone will be so impressed by what you know.  😉
For starters, to say that Thanksgiving was a time where the pilgrims and Indians came together as friends for a feast, is severely underrated.  And, were I to try to recap for you the 50+ years of alliances and wars that occurred between these people in the historical retelling of The Mayflower by Nathaniel Philbrick, we’d both be here a long time!  So let me give me the basics, and encourage you with absolute sincerity that this book is a phenomenal read.
Now, our story starts in Leiden, Holland.  Before the pilgrims set sail for religious freedom to the New World, they attempted Holland.  Most of us thankfully will never know the hardships that these people underwent in their attempt to make a new life for themselves.  For the pilgrims who lived in Leiden, they were slaves.  All of them, including the women and children were forced to work long hours in the factories to earn their keep, and barely received any pay.  Their religion was persecuted and they had to gather in secret.  When enough was enough, plans started to be made about a voyage to the new world.
But these people were not rich, government officials, they were simple and poor puritans.  Several times the voyage seemed to make progress, only to have the business deal fizzle out from beneath them.  Even their first stretch of sailing was a complete disaster.  There were in fact two ships that left England, the Mayflower and the Speedwell, but the Speedwell’s captain had been sold faulty sails that were much too big for the vessel and when the Atlantic’s winds ripped through them, the support beam cracked and the boat began to leak.  Both ships headed back to shore.  Some of the Speedwell’s passengers clamored aboard the Mayflower, while others decided it a was sign not to risk their lives any further.

Joe and I outside the Mayflower II Recreation

The Mayflower suddenly held more than its capacity of people and not all of them were getting along!  Amongst the pilgrims we all know and talk about, were other Englanders who had come from the Speedwell, a few militia men, and the ship’s crew.  It was crowded and smelly and there was little privacy to the whole journey, which lasted months.  Amazingly, only two lives were lost from those on the ship, and neither occurred until after they had docked.  One of the ship’s men died, and William Bradford’s wife, Alice, was found overboard and it can be speculated suicide was the cause, as the Bradford’s had to leave their only son with family in England until the new colony was established.

The pilgrims had depleted their supplies and were still huddled below deck of the Mayflower while roughly 10 men went out each day to find suitable land.  Before establishing the colony in Plymouth they came across several mounds in the earth which held inside them corn, dried meat and other housewares and weapons.  They also held bodies.  The pilgrims had unearthed several Native burial mounds.
Their first encounter with the natives was a shooting match with the Narragansett Natives shooting arrows at them and they shooting their muskets.  The Natives were wary of any white travelers since those who had come before them cheated the Indians out of land, and spread disease.  But the English’s fancy form of dress and iron kettles for cooking proved useful trading supplies.  With the aid of Squanto, a native man who spoke English, a trade alliance was made between the pilgrims and the Wampanoag tribe.

What spanned for the next 50+ years was an up and down relationship between native tribes and the English settlers.  Every chief was in battle with the other tribes for territory, and of course the English were expanding their settlements too.  The greatest alliance of the 17th century was probably that between Chief Massasoit and the pilgrims’ Governor William Bradford.  Through the assistance of Squanto, these men made an alliance against Massasoit’s enemies and assisted the natives in battle, giving them guns as weapons and other supplies.  Massasoit, in return, offered protection and additional furs/food to the pilgrims.  Without his people’s aid, the pilgrims would not have survived the first year.

One of the most significant acts of kindness that showed the alliance between the natives and pilgrims was Thanksgiving, more likely referred to by the attendees as a Harvest Celebration.  It lasted three days and was put together by about 6 women, two of them teenagers.  The pilgrims invited their Wampanoag friend, Massasoit who brought with him his wives and honored soldiers.  The natives taught the pilgrims games and shared some food from their hunts, but the reality is they nearly ate the pilgrims out of house and home.  Nonetheless, were it not for the stolen supplies from the burial mounds, the pilgrims wouldn’t have survived the first year.  Each owed the other greatly.

A Kitchen Area inside the Pilgrim Houses

Hay stuffed Mattress for a Bed

Thanksgiving and the story of the pilgrims is very dear to my heart because I am a descendant of two pilgrims who crossed over on the Mayflower.  John Howland came over as an indentured servant with the colony’s first governor, John Carver, but Carver and his wife perished that first year.  Howland became a respected member of Plymouth’s colony and helped begin a fur trade expedition further north.  After a year or so settled he married fellow Mayflower passenger, Elizabeth Tilley, who had lost both her parents that first year around the age of 14 or 15.  They raised 10 children and are the most prominent Mayflower ancestors known because they survived to old ages.  Most descendants today come from the Howland family, and John is my 15th great-Grandfather.  My family stems from the tree of his eldest child, a daughter, Desire.  Last summer, I made a trip to Boston, Massachusetts and took a day train into Plymouth and toured Plimoth Plantation, a living museum that recreates the historical houses and people of the Mayflower crossing.  It’s one of the most moving and fascinating history tours I’ve ever been on.  The plantation also includes boarding the Mayflower II, a replica ship actually sailed from England to Massachusetts in a symbolic journey.

The Navigator's Room aboard the Mayflower II 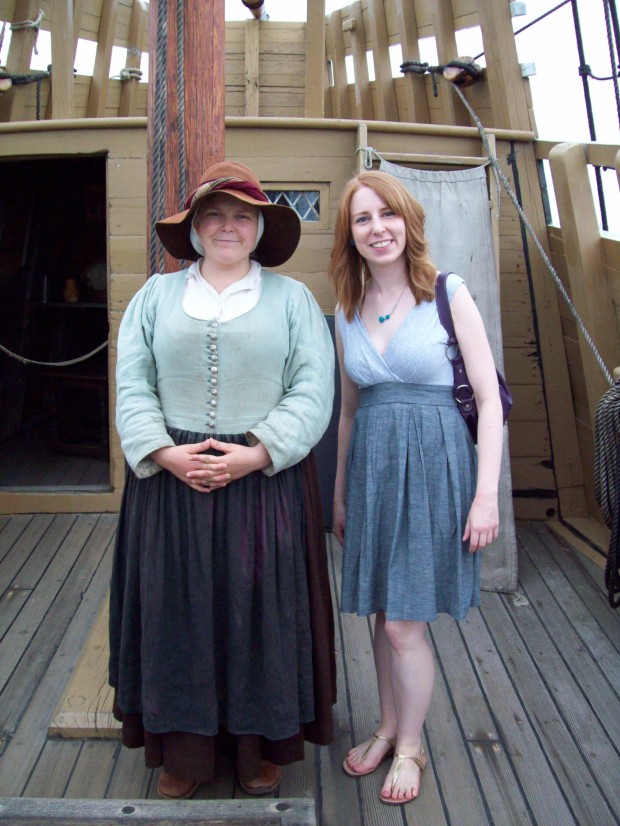 Chatting with Priscilla Mullins aboard the Mayflower II

I was also able to visit the Jabez Howland house, a home built by John Howland’s son that is one of two remaining homes built and inhabited by an original Mayflower pilgrim.  Entering the home of my ancestor was an indescribable experience.  I imagined the days he lived out with his family, the winters he survived, the memories he had of those early days, and most of all his courage. 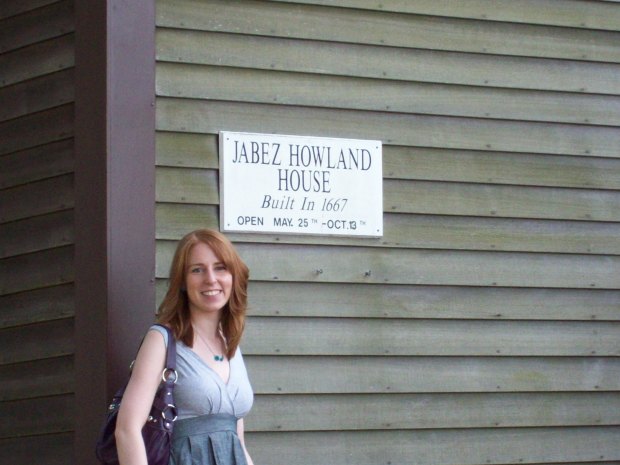 Honestly, I barely touched the surface of the story of the pilgrims and those first 50 years after settling.  Philbrick does an exceptional job of telling a captivating story of “courage, community, and war.”  I encourage everyone to learn the real story of the people involved in creating a national holiday of thanksgiving through reading his book.  And if you’re ever out east in the Boston area, definitely take a trip into Plymouth and visit the Plimoth Plantation and Mayflower II.  It’s a totally interactive site and historically acclaimed.  They are learning new information all the time.

For more info on John Howland or the first years of the pilgrim’s settlement, check out my guest post, A Thanksgiving to Remember, at David Walker’s blog.

What questions do you have?  Are you surprised by the reality of the first Thanksgiving?  Did you know at that time that eels were the dinner delicacy, and lobster was the throw away food?  What traditions does your family celebrate this time of year?  Have you ever traced your family tree and been surprised who’s shown up there?

Happy Thanksgiving, Readers, from my family to yours!